The Indian diaspora in South Africa is often homogenised into stereotypical assumptions of “Indianness”, from samoosas and sarees to Biryani and bindis; references that often constitute “culture”. Dance, Bharatanatyam in particular, is often one of those reference points, especially within the “Indian” community. This art form, despite the presence of the South Asian diaspora in South Africa for 160 years, is still a form of dance that remains on the margins of contemporary dance practice in the country. What does it mean to perform a classical South Indian artform in the context of a contemporary post-colonial and post-apartheid society?

1. What is this culture in relation to dance?

2. How can we begin to rethink and reimagine the use of Bharatanatyam in contemporary South Africa?

With reference to some aspects of performances by Dr Anita Ratnam, Dr Janaki Rangarajan, collaborative work between Manesh Maharaj and the Flatfoot Dance Company, and lastly my own engagement with dance (both as a dance practitioner at Sarvavidya Natyaalaya and as an independent visual artist) I hope to demystify, debunk and re-evaluate how we think about this term “culture”, through a brief unpacking of these re-imaginings of classical movement and myth in the contemporary.

While attempting to present the use of classical dance as activism through a feminist lens, the aim is to simultaneously address the function of mythological narrativization in the contemporary. Narratives that themselves often carry and uphold patriarchal views and systems guised as “culture”. 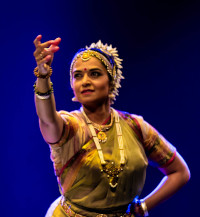 Reshma Chhiba is a visual artist and dancer based in Johannesburg, who is interested in the intersection between contemporary visual art and classical Indian dance practices in South Africa. Through obsessive encounters with the goddess Kali, she aims to blur the lines between the mythological/real, feminine/masculine, Indian/Black, performed/painted, and transcendent/physical.

Chhiba is the co-founder and Creative Director of Sarvavidya Natyaalaya and also serves as Exhibitions Curator at the Wits School of Arts.