In 2001, I landed in Durban for the first time as a Sociology PhD. student and an experienced Bharatanatyam dancer. Within weeks, I had connected with Suria Govender, auditioned for the Surialanga company, and started attending rehearsals regularly, learning and dancing alongside the South African Indian women and Zulu men who were part of the company. Within a month, we had performed at the Playhouse. Over the next year, I went on to share the stage with the remarkable dancers of Surialanga dozens of times, and later went on to teach with S’bu and Sandile, the two principal Zulu dancers, at Hillview Primary. I have continued to be in touch with Suria Govender and the dancers since then, and have published two journal articles based on my participation in the company, and more recently, on interviews with company members. In this presentation, I will share some photos of my experience with Surialanga, and reflect on what I, as an Indian-American dancer and scholar, found so inspirational about Surialanga’s work: the crafting and constant remaking of a distinctly South African Indian dance that centered Bharatanatyam but never allowed it to be static or taken-for-granted. The choreography and productions always forged new connections between the dancers—who kept changing—and the audiences, who were also changing over time. And yet, Surialanga’s connection to the democratic, intercultural promise of the new South Africa has been sustained, even as the country, and that promise, faces grave challenges. 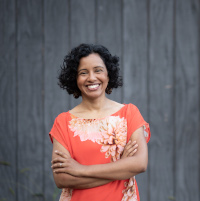 A lifelong Bharatanatyam dancer, Smitha founded NATyA Dance in Natick, Massachusetts in 2015 after three decades of training and performance. NATyA currently offers Bharatanatyam classes for all ages and supports NATyA Dance Collective, a collaborative Bharatanatyam ensemble group. Born and raised in the U.S., she has trained continuously with prominent Bharatanatyam teachers in the U.S. and India since age 5. She has performed in professional solo and group productions all over the United States. In South Africa, she has performed and taught with the Surialanga Dance Company of Durban. In 2003, she co-founded NATyA Dance Company with fellow dancer Vallari Shah. Over the next four years, they performed over 80 shows all over the California Bay Area, including four original productions. Since 2008, Smitha has been training in Bharatanatyam, contemporary dance forms, and Indian martial arts while performing with Navarasa Dance Theater. She currently serves on the Navarasa board and continues to train in Mysore style Bharatanatyam with Dr. Sindhoor.

For an overview of her current dance work, see natyadance.org.